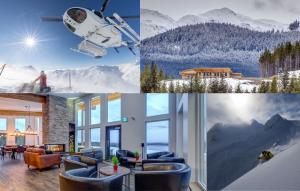 TERRACE, B.C., CANADA, November 24, 2022 /EINPresswire.com/ -- Northern Escape Heli Skiing (NEH) has won the World’s Best Heli-Ski Operator award at the 10th Annual World Ski Awards. NEH is a pioneer in the heli ski industry and has been steadily pushing the envelope in the luxury adventure tourism space since 2004.

“The World Ski Award for Best Heli Ski Operator is quite prestigious and we’re very pleased to win this year,” says Northern Escape President, John Forrest. “People have started to recognize our tours, terrain, and snowpack as the best in the world.”

Over the last 19 years, NEH has grown and evolved into an industry leader, with three luxury lodges, the lightning-fast Agusta Koala helicopter (aka flying Ferrari), snowcat backup for storm days and a culinary team of Red Seal chefs serving local BC cuisine and award-winning wines. With its far north location, on the edge of the Alaskan Panhandle, NEH offers some of the best, big-mountain, deep powder skiing and snowboarding on the planet in its 5,500 sq kms of exclusive terrain.

In addition, NEH is one of the few carbon-neutral heli skiing operators in the world, with a carbon offset program that benefits The Great Bear Forest and the First Nations living in the region. The company has a long-term plan to reduce greenhouse gas emissions and adopt renewable energy sources, such as solar panels and electric vehicles to support its operations.

“In the last decade, Northern BC has really come into its own. The snowpack is reliable, the weather is good, and the terrain is spectacular,” says Forrest. “This award is a testament to our work and vision for where the industry should be. We intend to keep pushing the envelope to offer the best heli ski tours in the world.”

ABOUT NORTHERN ESCAPE HELI SKIING | Founded by a group of friends and outdoor enthusiasts John Forrest, Benny Abruzzo, Teddy Allsopp and Dave Riddle in 2004, NEH offers the ultimate small-group heli skiing experience. Nestled deep in Northern British Columbia’s Skeena Mountains, NEH connects skiers and boarders from all over the world with more than 5,500 sq kms of untouched terrain and 29 sq km of cat skiing trails. NEH offers three luxurious lodges with all the amenities a guest could want including hot tub, sauna, massage room, games rooms, comfortable lounge areas and high-speed wi-fi. Mitigating its environmental impact is one of NEH’s top priorities. It is now one of the very few carbon neutral heli skiing operators in the world. www.neheliskiing.com

For inquiries or corrections to Press Releases, please reach out to EIN Presswire.
✕
× Close Ad